You are here: Home › Arctic › Cruising in the Arctic: What does it mean for safety and security?

Over the weekend the Crystal Serenity visited Nome, Alaska on its way through the Northwest Passage (NWP)

This is a big deal.

The Crystal Serenity has about 1,700 people on board, about 1,100 tourists and 600 crew. The cost? A small sum of $20k for the low end accommodations. It is the largest cruise ship to try to sail the NWP and is doing so under a microscope. Depending on the sector in which you work, there are a lot of opinions running around about whether this is a good thing or a bad thing. I’m not here to answer that question, but what I can provide is a little information and a few links you can use to draw your own conclusions.

The Arctic region (the whole thing, not just the US) is home to about 4 million people. So hold up on the “pristine nature reserve in a snow globe” thinking right there. There has been oil exploration and extraction in the US since about the 1970s, and longer in other parts of the Arctic region – so no, oil and gas activity is not new. For at least that long, tug and barge and other cargo ships and tankers have visited northern ports for resupply of high north communities. There is a very short season for these communities to bring in supplies, like fuel and home heating oil along with containerized goods and bulk products. That season is getting longer, but generally lasts from about July to October. Which means ships have been up there for a while.

The economic options in Alaska are also limited – there is a lot of hunting and fishing (commercially and for subsistence) and oil and natural resources (among other things). Alaska doesn’t have the same tax structure as other states, and so much of their revenue is dependent on a strong market for their exports. When fuel prices go down, as they have, it hurts the economy and communities look to other potential economic opportunities. Alaska would not be the first state to turn toward expanding tourism to help offset these losses. Some entire countries operate with tourism as one of their biggest economic drivers. The potential for increasing tourism to be a big boost for some of the most remote Alaska communities is certainly real. 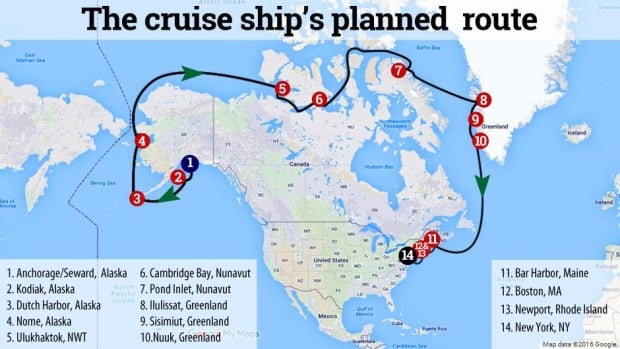 Which brings us to today: the Crystal Serenity is underway on part of a 32 day trip from Alaska to New York. Yes, there are risks. This is a pretty good rundown of whats going on up there. Basically, the cruise ship has two ice pilots (yep, what it sounds like, guys who know how to navigate in ice), an escort vessel (one that can help break ice if needed), ice sensing radar, and a host of other weather and forecast tools to help make sure the ship is safe. They are also burning distillate fuels (BIG part of the Arctic debate is the kind of fuel that should be allowed) and they have committed to no dumping of gray water or trash while up there (trash is illegal, gray/black water i.e. waste water, is not). These are all steps that are partially regulated through the International Maritime Organization under the new Polar Code which comes into effect in January of 2017. I say partially, because there are still things like the fuel and the waste water that are not currently regulated and a number of groups think this should change.

That’s all great, but what if we have Titanic II on our hands? That is also an issue. Infrastructure on the north slope is spotty and search and rescue capabilities are hard to come by (see this report for more on infrastructure). But, the Coast Guard is hosting a joint exercise right now to practice for this exact thing. Exercise Arctic Chinook is a multi-day maritime search and rescue exercise being held in the vicinity of the Bering Strait. The exercise simulates an adventure-class ship traveling through the Bering Strait with approximately 250 passengers and crew that experiences an incident that degrades to become a catastrophic event… So not exactly the same scale, but there is awareness of the possible issues and a proactive approach is being taken.

In conclusion – while the risks are apparent, the idea that this whole thing is fly-by-night and new to the region is not completely accurate. Hope this helps to provide a bit more context and  a few resources for those who would like to look into it more.

4,738 Responses to "Cruising in the Arctic: What does it mean for safety and security?"